In honor of Black History Month, we will share highlights from the Smithsonian Institution’s Nation Museum of African American History and Culture during February. The stories and objects we will share are intended to illustrate significant moments in African American history and the broader history of the United States. Stories were selected to highlight U.S. foreign policy priority themes, which range from U.S. history and culture, to civil rights, civic engagement, and women’s empowerment. Objects are both personal and historical, tied to famous figures like Rosa Parks and Malcolm X, and to everyday individuals who were themselves part of local history.

Prince Simbo was an African American man who served in the Revolutionary War on the side of the United States. What little is known about him comes from this engraved powder horn and two military documents bearing his name. We know that he enlisted in 1777, and that he lived in Glastonbury, Connecticut, where slavery was legal at the time. He was likely free, as it was unusual for enslaved people to serve in the Continental Army. Many people of African descent fought for liberty in the Revolutionary War, in the hopes of ensuring their personal freedom. This was a gamble, as only some states abolished slavery after the War. Powder horns were typically carved from cows’ horns, and were used to hold gunpowder and keep it dry. Prince Simbo’s powder horn displays carvings that he probably engraved himself, including images of a dove, a sun, a pine tree, and a repeating eye motif. The word “Liberty,” engraved on the back of the horn, evokes Prince Simbo’s hopes for the future. With these engravings and personal touches, the horn is a unique record of Prince Simbo’s own personality.

“The Revolutionary War Patriot Who Carried This Gunpowder Horn Was Fighting for Freedom –Just Not His Own,” article, Smithsonian Magazine http://www.smithsonianmag.com/smithsonian-institution/patriot-who-carried-revolutionary-war-era-gunpowder-horn-was-fighting-freedomjust-not-his-own-180959385/

Credit : Collection of the Smithsonian National Museum of African American History and Culture

Before abolition, free African Americans lived an uncertain existence. Free African Americans had to carry documents certifying their status, which had to be renewed frequently. These documents, known as Freedom Papers, were vitally precious because any freeman traveling without papers ran the risk of being fined heavily or even sold back into slavery. Former slave Joseph Trammell registered as free in Loudon County, Virginia, in 1852, and re-registered every two years to renew his Certificates of Freedom. Freemen’s movements were restricted –Virginia did not allow freemen within state lines without special permission. So for Trammell, who probably wished to remain in Virginia for family reasons, his freedom papers were doubly  precious. The documents describe Trammell as being 170 centimeters tall and having a small scar on his forehead and a longer one on his left forearm. He was born in 1831 and died in 1859, and was twenty-one years old when these papers were signed. The tin case Trammell fashioned to carry his papers is a testament to the legal and personal value of these documents.

“The History Behind a Slave’s Bill of Sale,” article and primary source, Smithsonian Magazine http://www.smithsonianmag.com/smithsonian-institution/the-history-behind-a-slaves-bill-of-sale-132233201/

Credit : Collection of the Smithsonian National Museum of African American History and Culture, Gift of Elaine E. Thompson in memory of Joseph Trammell

𝐇𝐚𝐫𝐫𝐢𝐞𝐭 𝐓𝐮𝐛𝐦𝐚𝐧 𝐡𝐲𝐦𝐧𝐛𝐨𝐨𝐤
Harriet Tubman was a born a slave in Maryland in 1822. After escaping to non-slaveholding Pennsylvania in 1849, Tubman became active in the Underground Railroad–a network of abolitionists and safe houses for escaping slaves –and led at least 13 missions to free around 70 enslaved families. During the Civil War she worked as a spy for the Union, leading a raid in South Carolina that freed 750 slaves. After the war she became active in the movement for women’s suffrage–the right for women to vote. Tubman drew on the cultural importance of religion as a guide and a tool in her activism. During her life she came to be known as “Moses” in recognition of her work to free slaves. During rescue operations, she sang hymns to signal to the slaves she helped to escape. Tubman’s worn hymnal is both an important personal artifact and a symbol of her life’s work. NMAAHC Founding Director Lonnie Bunch said of the museum’s Tubman artifacts, “There is something both humbling and sacred found in the personal items of such an iconic person.”

Banner with motto of Oklahoma Federation of Colored Women’s Clubs

This purple silk banner from 1924 bears the motto of the Oklahoma Federation of Colored Women’s Clubs, itself a part of the National Association of Colored Women’s Clubs (NACWC). Between 1896 and 1916, over 300 colored women’s clubs sprang up around the United States, with a combined membership of nearly 100,000. Members aimed to uphold the respectability of black women by acting as positive role models while working to improve life for poor African Americans. Colored Women’s Organizations engaged in social and political action to improve life not only for colored women, but for black men and children as well. They took aim at diverse racial and gender issues. Over the course of their history, Colored Women’s Clubs advocated for temperance, women’s suffrage, voting rights for black men, and campaigned against lynching, poll taxes, and segregation. The motto emblazoned on this banner, “Lifting as we Climb,” perfectly captures the NACWC’s mission to improve the lives and social position of all African Americans.

“About Us,” article, National Association of Colored Women’s Clubs http://nacwc.org/aboutus/index.html

The Rise and Fall of Jim Crow,” article, PBS http://www.pbs.org/wnet/jimcrow/stories_org_nacw.html

Credit: Collection of the Smithsonian National Museum of African American History and Culture

During World War II, the United States mobilized against the Axis powers (Germany, Italy, and Japan), even as many areas of society –including the armed forces –remained segregated. There were no African American military pilots until 1939, when civil rights leaders successfully advocated for African American units of the Army Air Corps. In 1940, the historically black Tuskegee University began training African American pilots, and in 1941 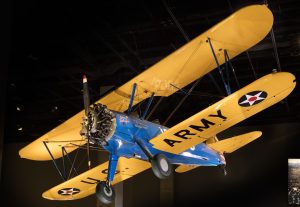 the 99thPursuit Squadron was formed, becoming the first ever African American air force group. The success of the training program led to more units, and eventually, the 332ndFighter Group and the 477thBomber Group became known as the Tuskegee Airmen. Over the course of the war, the Tuskegee Airmen distinguished themselves in missions over North Africa, Italy, and Germany, and gained a reputation as the best pilots in the U.S. military. In all, the Airmen flew 1,578 missions, destroyed 261 enemy aircraft, and were awarded over 850 medals. The Tuskegee Airmen’s success resulted in a push to end segregation in the armed forces. The group enjoyed public admiration, beginning with First Lady Eleanor Roosevelt’s visit to the Tuskegee training program in 1941. The complex training and staffing needs of such a large program also chipped away at the Army’s strict segregation practices–for example, the Army had no separate facilities for training flight surgeons, so Tuskegee flight surgeons trained in racially integrated courses. After the war, the Tuskegee Airmen’s reputation convinced many officers of the need for integration.

Louis Armstrong, the influential jazz trumpet player, was born in New Orleans in 1901, and started playing a tin horn while working on a junk wagon as a child. He joined Joe “King” Oliver’s jazz ensemble in his teens, and became well-known nationally in 1925. His success continued to grow over the course of a long and memorable career pioneering sophisticated and heartfelt jazz. Armstrong’s instrument was essential to his identity. “When I pick up that horn, that’s all. The world’s behind me, and I don’t feel no different about that horn now than I did when I was playing in New Orleans. That’s my living and my life,” he wrote in 1957. He owned several individual trumpets over the course of his life –he would typically use a trumpet for about five years, then give it away as a gift. The French company Henri Selmer made this inscribed B-flat trumpet especially for Armstrong in 1946, after a request from his manager Joe Glaser. The elegant instrument is a symbol of Armstrong’s deep contributions to American music.

Credit: Collection of the Smithsonian National Museum of African American History and Culture