In 2017, the United States Congress passed a resolution designating October 28 as National First Responders Day, which honors firefighters, police officers, EMTs, and all those who are first on the scene in stressful situations.  During the week of October 23 – 30, in honor of this day, the Town of Danvers will fly public safety memorial flags in front of the Police Station at 120 Ash Street and the two Fire Stations at 64 High Street and 460 Maple Street.

The Danvers Fire Department will fly the National Fallen Firefighters Memorial flag at the Fire Stations.  Congress created the National Fallen Firefighters Foundation to lead a nationwide effort to honor America’s fallen firefighters. Since 1992, the non-profit Foundation has developed and expanded programs that fulfill that mandate. Their mission is to honor and remember America’s fallen fire heroes and provide resources to assist their families in rebuilding their lives and work within the fire service community to reduce firefighter deaths and injuries.

The Town of Danvers counts among its former employees two first responders – a police officer and a firefighter – who are recognized by their respective national organizations for their ultimate sacrifice.  Danvers Police Officer George Nowak (heart attack) and Firefighter Matt Smith (cancer) served the Town of Danvers, with distinction, for 22 years and 17 years, respectively, before their untimely passing.  Both men were dedicated employees and civic minded individuals.

The Town of Danvers, the Danvers Police Department, and the Danvers Fire Department fly these flags to honor all firefighters and officers who have died in the line of duty while proudly serving their communities. 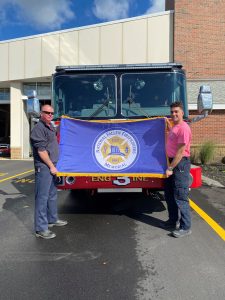 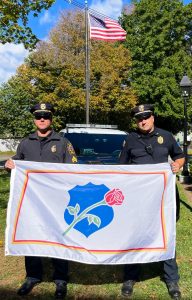